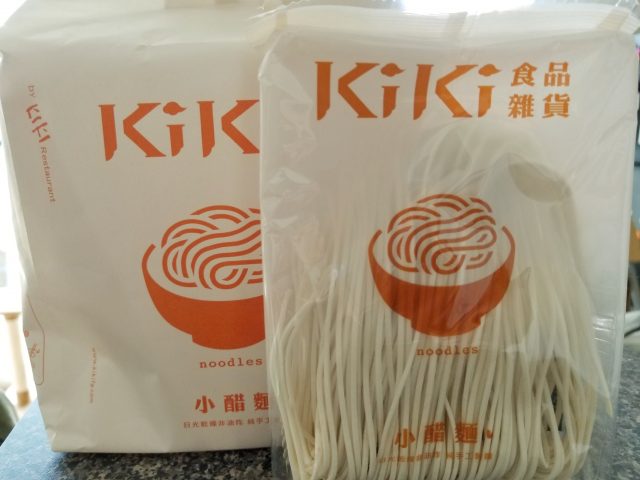 So yagirl was in HMart the other day NOT looking to buy ass, and she came across some upscale noodles worth a closer looksie. Turns out Kiki Noodles from Taiwan have some really interesting flavors that don’t come cheap – $11.99 from Asian-run places and upwards of $23 on Amazon for a 5-pack if you’re a high roller. Yo wtf…you can definitely get ass cheaper than that. I know a guy. IF I were looking to buy some, which for the record, Mongomery County Court System, I DEFINITELY AM NOT. I’d better stfu before ya’ll get me in trouble on Not Your Mother’s Ramen Episode 36: KiKi Noodles – Young Vinegar Flavor.

Young + vinegar are two words that technically should not go together. Yo lately vinegar’s been confusing the hell outta me. It used to be that there was one kind of vinegar: salad vinegar, and it came pre-mixed with oil in that cheapass BPA bottle with little dried herb floaties on top so you could choke down some rank ass salad while wishing you were diving into a steaming bowl of noods instead of your mom’s cringe-worthy rendition of semi homemade cultural misappropriation she learned watching Sandra Lee, aka what is Kwanzaa Cake. Then there’s also that “drinking vinegar” shit that’s being passed around vegan health nut circles and if ya’ll are into that, go ‘head gurl. I figure I got a few years left on this body and by the time I am done with it we will be beyond the likes of anything vinegar can fix.

But au contraire, says KiKi. We chose some Chinese black vinegar that’s ripe but not funky, lightly sweet, musky, and gentle on the acid, almost feminine in mouthfeel, as it coats some amazing quality noodles in its savory slip of a dressing. Damn, when did growing old become this sexy? Oh ya’ll thought Amber* from homeroom with the “hot piece of ass” (her dad’s words, not mine) was gonna quit after she had her third kid…NOPE. She just can’t WAIT to hit the geriatric ward’s minimum self check-in range so’s she can be the youngest hot thang stirring all the grandpas up from their 2 pm nap, just like old times. #nostalgia #complicit #itsallshesgot

Bottom line: KiKi’s Young Vinegar noodles are a great gateway noodle to the more niche Chinese noodles for the dank/funk-inclined. If your palate is more woke like yours truly’s, then you’ll probably want a bit more flavor to make you pucker your lips and your butthole in anticipation of what you’re about to get hit with. But on the other hand, if you’re trying to get your girl or man to warm up to a bit of foodie bdsm, start with a smaller plug like Young Vinegar noodles, then maybe move into KiKi’s Aged Vinegar Noodles when they’re ready next week.

* Name changed to protect her privacy and my trite ass from being sued for libel.