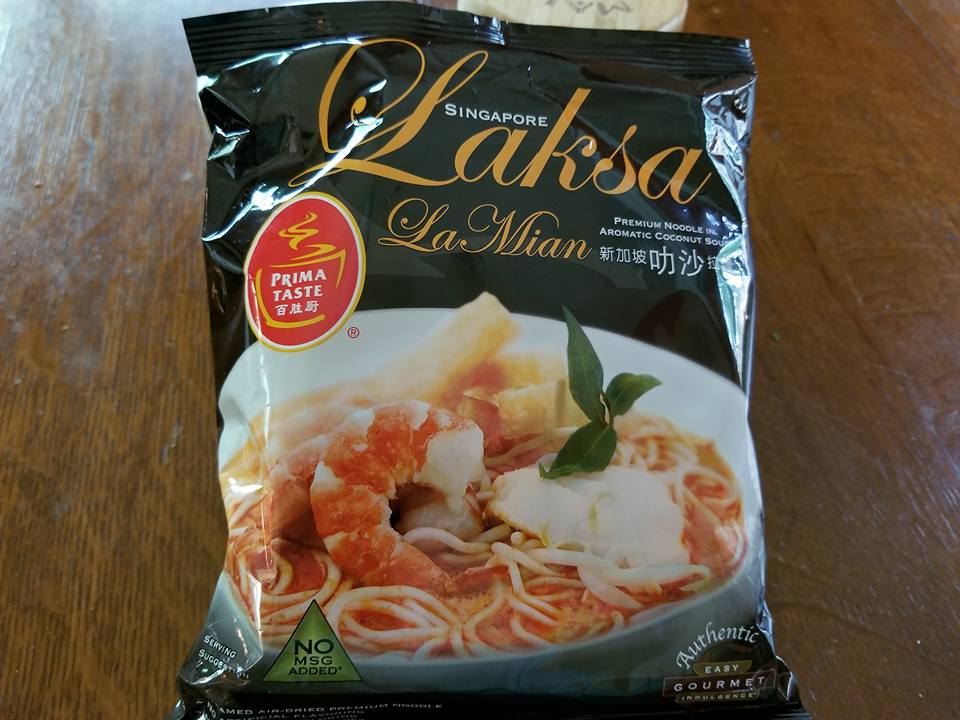 You know what time it is! That’s right, it’s time for Not Your Mother’s Ramen Episode 5: Prima Singapore Laksa La Mian instant noodles.

See peeps, I’m the type of girl who does everything she can in her life to avoid drama. I enjoy structure, I ask for outside perspective to keep the cray cray realistic n chill, and I like to know what’s coming up weeks ahead because it really does take that long to mentally prepare myself for a bombshell. Anything can be mentally accepted if you give me enough time. So let me just say that I was not prepared for the curveball these noodles threw my way.

Riding dat chili crab high doe, I had high hopes for Prima’s Laksa flavor, especially given it’s popularity and rave reviews it has received from my predecessors. Straight from the packet, you got your sauce pre-mix, an opaque white powder that was undoubtly coconut looking strangely of cocaine. This was mixed signals #1. Why you gonna get me all excited when I know you ain’t mean it like that?? Don’t fuck with me, noodles. I WILL CUT CHUU. But no, do your breathing exercises, Nat, remember? Gotta pray to keep the cray away.

Next, the Laksa paste packet smelled overpoweringly shrimpy. So shrimpy, in fact, that I was scared I wouldn’t be able to taste the coconut at all, like some other reviewers have claimed. Odd. So here’s drama point #2: WTF WHERE WAS THE SHRIMP FLAVOR? The coconut broth in the end was thicker than baby got back. Truly, they need to be selling packs of just the coconut soup base, because nobody uses a full can of coconut milk in anything, then they shove that shit in the back of the fridge only to throw it away 6 months later when it turns alive like the Blob. #businessidea #getonit. The shrimp flavor, however, all but disappeared. Wtf how they gonna do me like that!???

Yes, the noodles were the same springy, air dried not fried, wonderful bouncy goodness as their chili crab flavor, but…I just can’t. My therapist has taught me that when drama tries to pull you in, you just gotta walk away. So no, Singapore Laksa La Mian. I love you, we’ve had some really great times, you’re perfectly spicy and your creaminess is that hug from behind comfort that I’m probably not gonna get from nowhere else, man or noodle, but this girl needs more stability and follow through in her life. Plus lime and herbs – not included – which definitely brought the experience up a notch. We had a great run, but I ultimately have to move on if I’m going to flourish.

But heeeeey, coconut soup powder…CALL ME!