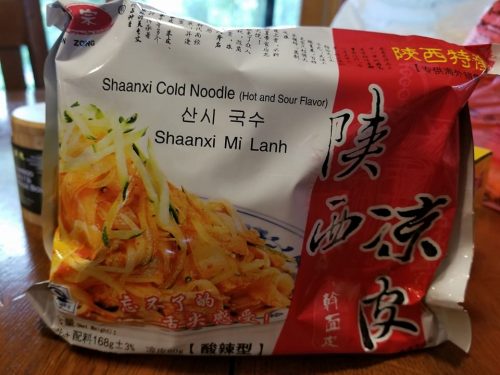 Ni hao, motherbitches! So I was thinking of ways to beat the mad swamp ass this godforsaken city gifts us every June, and then it struck me: COLD NOODLES! Aww yis. For the foodie fam out there, you’ll likely recall that Xi’an flavors (western China; think Chinese-Muslim silk road area, kinda like Sichuan but more exotic) are quickly becoming popular in the DMV area. Panda Gourmet off of New York Ave is the most legit-ist of legit Chinese eateries focusing on Xi’an dishes. Nestled in the bosom of a seedy Holiday Inn, this one way trip to flavor town is packed to the brim most nights with primarily Chinese clientele, gives suspect translations for its English menu (Best Taste Pork Kidney, anyone?), the service oscillates between standoffish and non-existant, but you swallow all that bullshit because you know they make the best motherfucking noodles outside of China and you don’t even care no more if it’s got enough crack in it to fall off the wagon again. I’m talking about Liang Pi. And if you don’t know what Liang Pi is, I suggest you edumucate yourself, STAT. A little sweet, pungent garlic, tangy vinegar, a touch of salty soy and fiery hot chili oil made with spices like star anise and cinnamon, plus delightfully numbing Sichuan pepper corn, this dish is also vegan af.

In other news, I hear that Xi’an Famous Foods in NYC expressed desires to eventually open up a store in DC proper, but who knows when that’ll be? Wouldn’t it be nice to be able to get Liang Pi anytime, anywhere, with as little human interaction as possible because you’ve been a basement dweller all your life and you don’t wanna face facts that your mom is right, you do lack the appropriate social skills to make real friends and not get the cops called on you for creeping in the wrong public places where other normal people usually congregate. Why would I want to have to actually work on myself by facing my insecurities just to cultivate the presence of a semi-functional and absolutely not weird human person? Fuck that. That’s what I thought. Next up for Not Your Mother’s Ramen Episode 9: Qin Zhong Shaanxi Cold Noodle – Hot & Sour Flavor.

I picked these up for $3.99 at H Mart in Fairfax and I know what you’re thinking: But Natalie, that’s some high rolling shit right there! I know you’re a big spender n all, but is the cost really justified? Why yes, yes it is. *Puts on best mansplaining voice* These noodles are premium hand-made, and it comes with four – yes, FOUR extras: 2 vinegars, one chili oil sauce packet that definitely has got some mad ground spices in there that will keep your mouth twerking out like idle hands on a fidget spinner, and a some dehydrated wheat gluten. Wtf is wheat gluten, you say? Besides asshole repellant, this is yeasty sponge cake to sop up all this motherfucking sex bomb hot flavor oil. This shit isn’t just for naturepath hippies anymore. #takomapark #represent #nohate.

Prep might take a little bit longer but it’s actually super simple. Pour boiling water over the dry noodles and gluten in a bowl, cover and go beat your meat for a solid 10-15, come back and rinse with cold water until properly chilled (this is to make sure the noodles stay springy), drain the shit out of it and mix it with the sauces. Yes, you can add alternatives as I did like roasted peanuts, bean sprouts, raw garlic and cilantro. But you really don’t need to. These noodles are like Beyonce. She don’t need no backup dancers, she’s the motherfucking Queen B and ain’t nothing gonna change that. One slurp and you’re instantly transported to the bustling unregulated streets of Xi’an. The chilled noodles cool while the warm oily spice makes you wanna suck more down, all the while the vinegar is there to brighten the entire dish and remind you to have fun you straight-laced square, it’s summertime. You don’t know exactly what is in this shiny cocktail of flavors that coats the chin and invigorates the senses (also unverified reports made up just now by me that it funnels blood to our nether regions so HEY-O PARTAY BELOW DECK!), but what you do know is that it’s lishus and Chinese af. The noodles have great pull and rough texture, the better to move that sauce to your eager pie hole. And what you unworthy assholes probably failed to notice until now was the artful pairing of flavors and sauces through layering. Tl;dr – love it or hate it, this shit is balanced and that’s not easy for even a chef to do, much less an amateur home cook trying to get a taste of the cosmopolitan life made possible by modern instant noodle packaging at the convenient price of $3.99. You’d be hard-pressed to tell the difference between these noodles and ones you order from an authentic restaurant, and that’s assuming you’re privileged enough to live near one.

Ya’ll, I gotta give respect where respect is due. These Shaanxi Hot & Sour noodles are the tits. And by tits I mean, gotdam! If I had a choice between these noodles and mediocre sex, imma take the noodles. #sorrynotsorry#pleasurableevenwhensoft #dicksout.