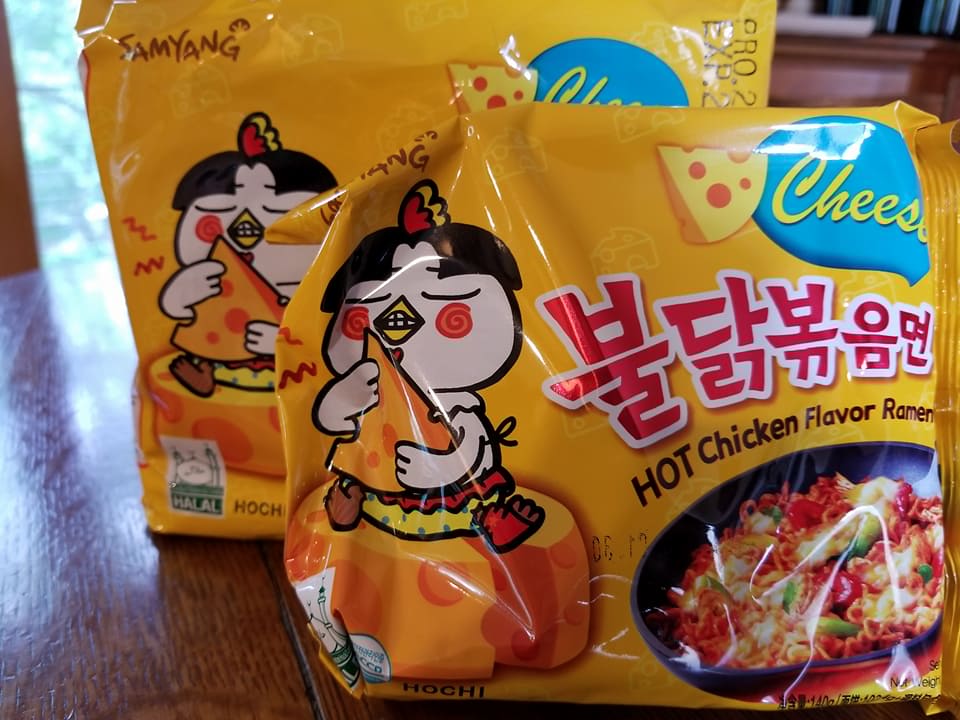 Summer is finally in full throttle so I decided why not fuck my mouth by BRINGING THE PAIN with some spicy Korean noodles for Episode 8 of Not Your Mother’s Ramen: Samyung Hot Chicken Flavor Cheese Ramyun (Cheese Buldak Bokkueummyun for you K-philes in the know). CHEESE & RAMEN, YOU SAY!? Blasphemy! That’s right, you basic bitches. Korea’s been upping their game and it looks like they made a deal with Satan himself to bring you some fiery hot cheese noodles that melts your colon, not your mouth.

The packaging should have been my first clue. Why’s it look like the Fat Chocobo from Final Fantasy got caught jacking off with a block of hot cheddah and instead of screaming Ma gtfo of my room like a normal teenager with anxiety and below-average coping mechanisms, he’s like “gimme 30 more seconds til blastoff, playa.” Fuckin kids these days ain’t got NO respect.

Let’s talk about the noodles. Shit’s like a full inch thick, curly af, and they’re even more impressive after they’ve been hydrated & drained. Korea, your noodle game is on point! Check out the starch on these things! That’s exactly what you want when you decide to be a lil bad and have a satisfying bowl of carby goodness. If you’re gonna treat yo self by ordering a plate of cocaine, then enjoy the fuck outta it and don’t half ass that shit, yo.

These noodles come with 2 flavor packets: deep red gochujang that’s so dangerous and runny it was probably diluted with napalm, and what looks and smells like powdered Kraft cheese, except with seaweed bits(!?!?!) because we try to keep it azn user-friendly. The instructions advise to reserve some liquid to dilute the sauce even further, and I decided not to tough it out despite every instinct in my body wanting the thickest cheesiest sauce possible. I’m glad I listened. The completed sauce concoction is GOOD. It’s strangely balanced between sweet, salty, sesame, just a kiss of cheesy – barely perceptible but strangely not disappointing at all, and yes, it’s there…just a bit at first, then hm okay I taste the pepper now, I thought it was gonna be- OMFG here it is, that spicy red pepper, shit eat faster, don’t pause too long or else your lips will swell like you’ve been working the back alley magnum customers all morning and you’ll begin to feel your heartbeat in your head in between sucking air through your teeth like a little bitch. Warning: you WILL feel these the next night. And probably the next day. But you gotta man, that’s how you know they’re legit. You’d stab the guy who cut your cocaine with baking soda, wouldn’t you? Of course you would, you thug. So don’t you DARE settle for anything less than the full spicy high these noodles have to offer.

Here’s the thing, though. After tasting these hot chicken cheese noodles, I totally get what Heath Ledger meant when he said “I just can’t quit you” after he went and got his heart ninja’d back on Brokeback Mountain. It’s been almost a week, and I can’t stop thinking about them. I must have them again. I would have them with a fox, I would have them in a box. I would have them in a boat, on a moat, with a goat. Especially with a goat. #interspecieserotica. And the darnest part is, they are super customizable, like a swiss army knife or those cute purple heels you got from Aldo to prove to yourself you’re a strong independent woman who don’t need no man cuz you can dress em up or dress em down, or the super chill dog that you can do anything to and he’s totally cool with it. Throw some real cheese on it and you’ve got a truly fusion dish going on the next time your parents get down on you for not being “cultured” enough. We want the perception of something without committing to the full lifestyle of actually having that thing. It’s the American way, goddammit.