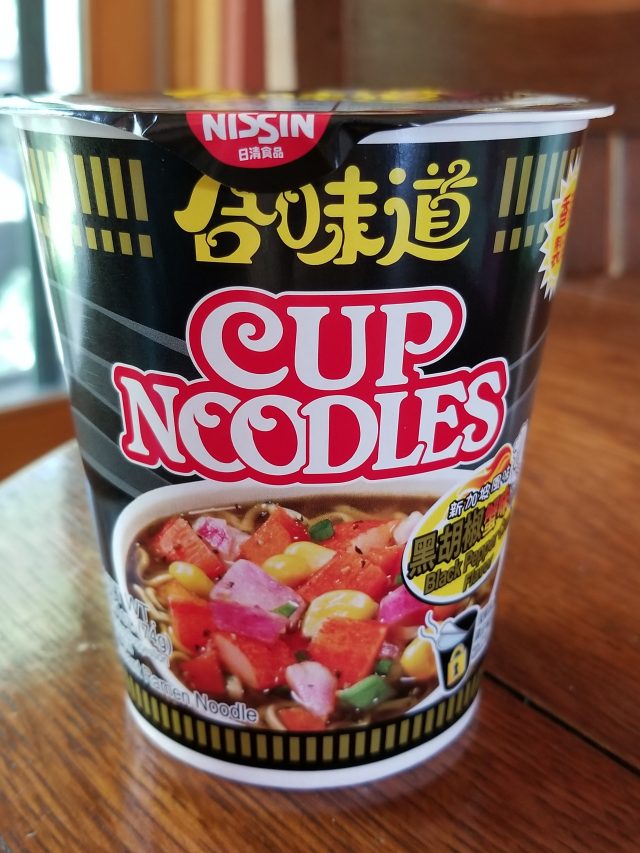 After my last uppity attempt to live beyond my means, I was metaphorically bitch slapped so hard by life that I have to shove a tooth brush up my ass to brush my teeth. [Dramatic re-enactment not shown]. This very clear message just for me was DEFINITELY the universe trying to send me a message, and it got me thinking: Holy shit, Nat, you can’t keep behaving like you’ve got the biggest dick in DC, you gotta just put your head down and fall in line a little more. Now granted, I’m a pretty staunch non-believer, but I ain’t stupid. JUST IN CASE there is a God(s), karma, or a world beyond my front door that is very scary and absolutely coming to get me if I don’t do some penance, imma get on their good side and take my beatings to even the score board this week for Not Your Mother’s Ramen Episode 14: Nissin Cup Noodles Black Pepper Crab Flavor.

For cup noodles, this isn’t half bad. It’s still the same floppy wet noodles you’ve come to love to hate, almost impossible to slurp because like most members of Congress, they possess no backbone or integrity. But thankfully, it’s less of a problem here, because you can’t concentrate on hating on the noodles when your mouth is being assaulted by some black pepper soup fuckkery. Yes, it’s that bad. I’m having legit flashbacks to when I was 3 and my mom ridiculed me like some punkass bitch when I couldn’t handle the colonel’s spicy black pepper chicken. Asian parents are savage, yo. But whatever, I just walked it off. It’s not like it did any long-lasting psychological damage.

Anyways, the soup. It’s familiar but not, that same cup noodles nostalgia that hasn’t changed in like 40 years, so you’ll have to decide for yourself whether numbing your taste buds with the black pepper bomb is an added dimension of sweet bliss flavor or the salve to protect you from experiencing any feelings whatsoever. I guess it goes without saying that the crab was pretty much nonexistant, EXCEPT when I noshed on the little crab sprinklings alone, then I was transported to purgatory, a small reprieve from wallowing in the 3rd circle of hell – that’s my hood, yo. But that’s what you get when you get too big for your britches, I suppose.