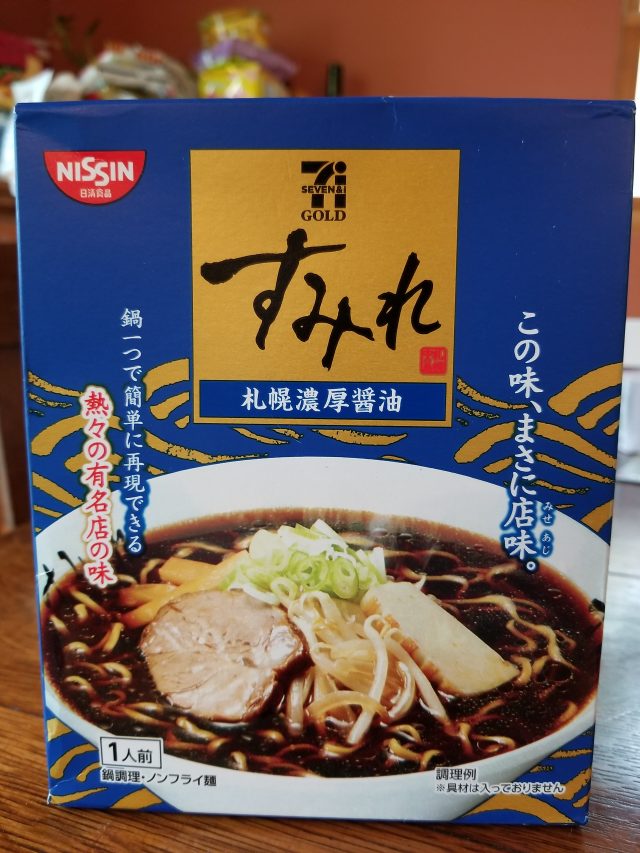 The perils of living in a place where prayers don’t reach means that people wanting the good stuff either have to learn to love what they’ve got or get real kinky with their improvisations. I’m the latter type of girl. And reality can go fuck itself cuz I’m not letting nobody get in my way of proving that getting older doesn’t have to suck. This is Not Your Mother’s Ramen Episode 19: Nissin Seven&I – Sumire Rich Shoyu.

Hokkaido style shoyu. Two-toned and unctuous, Sumire packs black tar soy sauce darker than my soul and heavier than cough syrup. But here’s where Sumire pulls through! Keep squeezing the packet and you’ll be rewarded with an oily, fatty tare sporting a rich flavor of roasted bones done just right. Go head, dip your finger in it. Ain’t no goo you get on the streets gonna be lighting up your taste buds like this.

After hydrating, the meat flavor fades into the background but is still there supporting the shoyu the way a proper woman should. Granted, it IS a salt bomb without tasting like a salt bomb, but if I’m gonna die from high blood pressure, this is how I wanna go.

Pretty sure they’re egg noodles, which cuts the shoyu quite nicely. At full girth, they’re a medium-width curly noodle perfectly matched for the broth, but you’d never know it at first. Not to worry. These bad boys inflate real nice cuz they’re growers, not showers. The directions said 3 min 30 for the boil, and not a minute more. Don’t get greedy, yo. While you’re topping the shit outta your meal-to-be, allow them to spend some time bobbing in that sin broth soaking up some shoyu goodness until they get dangerous. How dangerous, you may ask? Let’s just say you’re gonna wanna shell out for that women’s self-defense class if you wanna stand a chance after being face fucked by this dynamic duo.

Grab yourself a pack while you still can. It’s perfect for Treat Yo Self 2017, Valentine’s singles 2018 (Pro tip: order yourself a present a month in advance, or enough time away so’s you forget you ever did it, sign the gift receipt “your secret admirer” and schedule delivery for your special day), or just to troll the piss outta your otaku buddies and earn some made geek cred that nobody givesafuck about. Or be like me, and use it to soothe that nassty burn that comes with aging and is definitely NOT a pulled lower back muscle that I rubbed with icy hot. One more year down the drain. Happy Birthday to me.