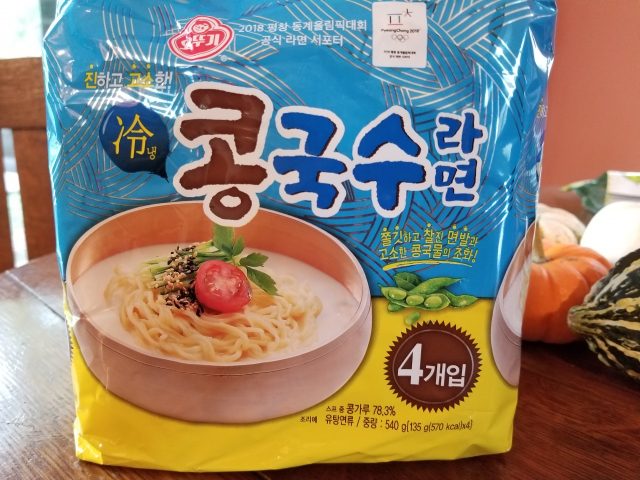 Since the dawn of time, human beings have pushed themselves to reach the epitome of the fully evolved man. And what single quality is the one incontrovertible measure of top of the food chain status? That’s right: Coolness, cuz it gets the girls n boys miring. And in some places, being a vegetarian = cool. WTF, crazy right!? Apparently not so crazy anymore. Much to my chagrin and the dismay of meat eaters unlucky enough to be forced to pimp their time for money in our nation’s capitol, turns out this hell hole is a bastion for #veganlyfe. So like any carnivore with sub-par social skills and fear-based aggression, you’ve got 2 options: eat em, or join em. And last I checked, vegans taste like shit.

But well well well, what do we have here? Noodles in cold soup made from soy milk? Say whaaaaaaaat? O_o

…New thought. Maybe we can come to a compromise and have a stone soup Thanksgiving situation going on here. I’m a nice gal, so in the interests of brokering a truce, we gotta check this shit out. This is Not Your Mother’s Ramen Episode 24: Ottogi Kong-Guksu Ramen (Chilled Soy Milk Noodle Soup).

Soy milk is milk in the same way that your Sunny-D is fresh squeezed: questionable marketing towards middle class moms, but it don’t matter when the taste is kid friendly. FYI white women, we Asians hook our kids by giving them the sweet stuff when they’re yee high for dessert. Shuts them up cuz it tastes like liquid ice cream heaven. Up your indoctrination game, white ppl.

Soy milk is made by boiling the beans and grinding them up until they exude a “juice” similar to horchata, except thicker like The Rock’s boner and more organic than the stuff inside his boner. Oh shiiiiiit. Instant deep smit.

Noodles are the heavy thick strands from Korea we’ve come to know & love. While they’re making in the pot, mix the soup: 200 ml of cold water from the Brita filter (the one you still use from undergrad 6 months overdue for a filter change cuz you’re survivormanning it v_v), stirred with the powder soup studded with black and white sesame seeds #racialharmony #idontseecolor #kumbaya. Once that’s done, go back to the noods. Boiled 3-4 min, rinse in cold water so’s they stay slippery and chewy, then plopped down in your bowl. Float some pretties on carb island. I recommend shredded cucumber, tomatoes, and eggs. This soup isn’t spicy at all, so drizzle some chili oil around if you so desire. Congratulations, Picasso. Admire your work and give yourself a few strokes while you’re at it. For the arts.

Whoa whoa whoa. This is a thing!? The soy milk soup is thicker than scroatmeal but you can’t think bout nothing besides scrambling for the nearest musical chair before you injure yourself in your involuntary foodie euphoria. Ice cold, slightly salted soy milk actually has a really refreshing substantial flavor, backed with a kiss of sesame, so what you get is a light but dense, creamy, a lil nutty, and all around satisfying soup. Think coconut milk feel and consistency without the coconut flavor. Cucumber goes really well in it, adding to the cooling effect, and if you killers still need some animal protein, that’ll work, too. Don’t front though, you’re horno for the soup and you’ll be leaving with your mouth torn up proper.

Korea, shots fired. Didn’t know ya’ll were gonna throw down a last huzzah for the summer that just won’t die. The rest of the Pacific Rim better bring it in Fall 2017, while I’m bout to get mad sciencey and see if this awesomesawce translates well warm while we wait for Pacific Rim 2 to hit theaters. Pick this shit up.