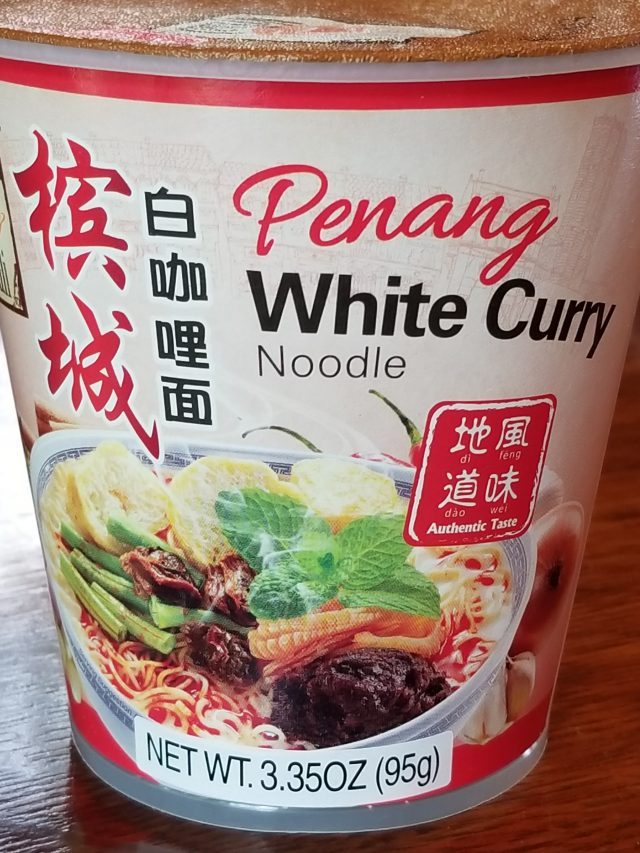 I’ve been hearing a lot lately about the new kid on the block: White Curry. That doesn’t sound like any curry that I’ve had before! So I decided to investigate the noodles that David Chang dubbed the #1 instant ramen in the world. Quote: “there’s just nothing like this on the market right now” and “it is the one instant noodle you might be able to pass off in an actual restaurant.” That’s high praise, David Chang, and you’re not one to fuck around. Still, being the rebel that I am, I gotta check this shit out for myself. What, you think I just accept whatever someone tells me without questioning it for myself? Shut up. You’re not the boss of me. Strap on your Depends for Not Your Mother’s Ramen Episode 22 – MyKuali Penang White Curry Noodle (cup version).

Medium thin golden noodles with an included fork? YES PLEASE! This baby comes with not 2, not 3, but *4* xtras. That’s right, suckas! I poured out the first packet and after the wafting smell of strong dehydrated anchovies and other tiny but powerful fish settled, you could see the glint of MSG crystals peeking through the pile of ash-colored stock, like diamonds. Or meth, depending on your values. Took a bump off the vegetables and legit got notes of deep fried soup. Yeeah boiiii. The non-dairy creamer is pretty non-descript, and both smelled and tasted of nothing, which is pretty remarkable, if you ask me. What is it though, you may ask? Oh I’m sorry, I thought this was noodle eating, not an interrogation, so put the guns away and keep your neurotic naysaying ass outta my review. Yeesh. Okay, let’s not get caught up in negativity, don’t give the haters what they want.

We’re all bad asses, and anyone knows that the defining characteristic of a bad ass is that they are attracted to dangerous situations with a high probability of death or jail time. Take a fucking look at the last sachet and try not to jizz in your pants, you motherfucking top bitch. What you are marveling at is thick dry paste that looks like Satan’s toilet bowl leftovers. Upon investigating said sphincter opener concoction and mebbe even tasting it a little (DON’T JUDGE ME IT’S HOW I LEARN), what I quickly surmised is that what we have here is pure ground spices in brick form. This is gonna be good.

Once hydration sets in you can bask in this soup’s full glory and marvel at the monstrosity it has become. Noodles are chewy and almost brittle, which I imagine could be improved (TBD stove top edition). Soup is deeply complex, insanely satisfying and filling even though it was only made from fish. That’s what spice does to ya, and the spice level on this is as spicy as it can be without being excessive or painfully so, as is the case in some Korean noodles; rather, you can tell that the hotness is incidental to the types of peppers used for flavor. At first you think the fish broth is gonna be skanky or unpleasant, but then the herb & spice mix takes over and it is anything but – in reality, it’s subtle by comparison. Anchovy broth, shrimp, garlic, onion, turmeric, star anise, cinnamon, cloves, coriander seed, fennel, cumin, white pepper, ginger, soy, msg high. This is what God’s vagina smells like. And don’t forget the top layer. Thick red hot infusion got me oiled up all homoerotic like a Turkish wrestler. #getsome #sploosh. You’re welcome.

My question is, with instant noodles like MyKuali White Curry, why the fuck would you EVER take Rice-a-Roni camping?? Don’t be a punkass bitch. Buy the fam a case for your next wilderness adventure and maybe they’ll forgive you for getting lit so bad that one time on New Year’s Eve you ran around trying to mouth kiss the house cat at ball drop. #truestory #sothathappened #awkwardmemories. FYI, you’re gonna wanna make two. Then eat both in front of your imaginary friend because you’s a badass.